This is what the shelf above my desk looks like, and it’s not because I do my nails at the office. 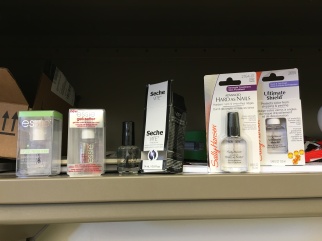 It’s like the cosmetics section of a Walgreens up in here.

As it turns out, figuring out how much realgar has degraded takes more than just looking at it and going, “Huh, it seems yellower than it yesterday.” This is where x-rays, more specifically x-ray diffraction, come to play. This is also where all of this top coat becomes involved, but more about that later.

WARNING: Lots of science ahead. If you’re not up for lots of science, skip to the picture of the donuts from Donut Mondays, a fascinating phenomenon in which MatSci students amalgamate every 168 hours in the presence of donuts.

X-ray diffraction, or XRD, is a technique for determining a crystal’s structure. Crystals are ordered arrangements of atoms, and those atoms form different planes within the crystal. If you hit a crystalline sample with x-rays of a certain frequency, those x-rays will scatter off these atomic planes. 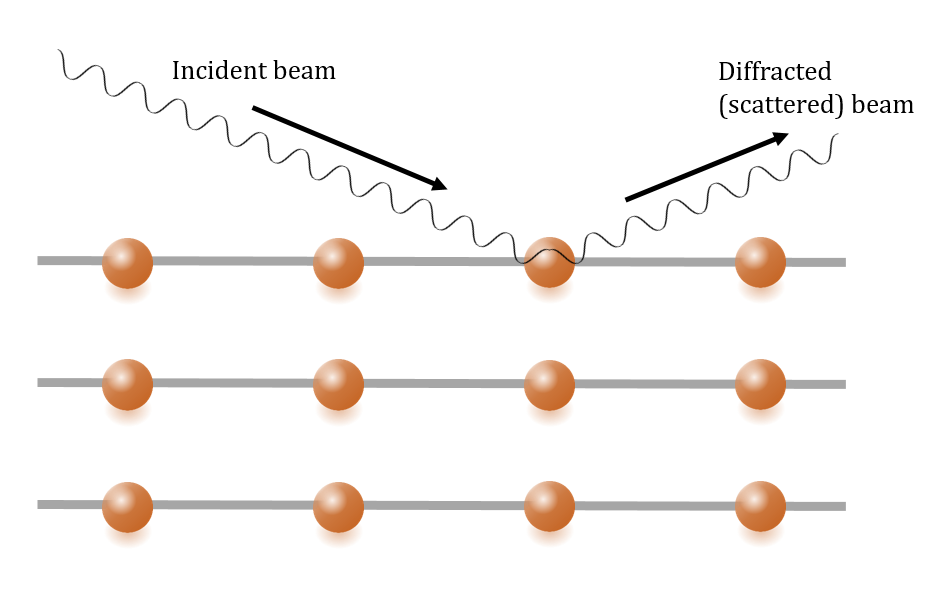 An x-ray scattering off a plane of atoms.

However, most of those scattered rays interfere with each other and cancel each other out. This means that we can only detect scattered beams in the instances where they constructively interfere.

Quick explanation: If two waves that are in phase, i.e. their crests and troughs line up, then they experience constructive interference and result in one wave of a larger amplitude. If two waves are out of phase, then they destructively interfere and cancel out.

What determines when the x-rays constructively interfere?

Take a look at this diagram I made myself, because all of the ones I could find on the internet were, quite frankly, awful.

Fun fact! Bragg’s law is actually named after TWO people, the epic father-son duo William Henry and William Lawrence Bragg, who jointly earned the 1915 Nobel Prize in Physics. I guess their family has a lot to brag(g) about.

This means that we can detect scattered beams only for certain angles of incidence (based on the wavelength of the x-rays and the spacing between parallel planes within the crystal). If we plot the intensity of versus the angle of incidence (actually, twice the angle of incidence for practical reasons, but the principle is the same), what we get is something that looks like this: 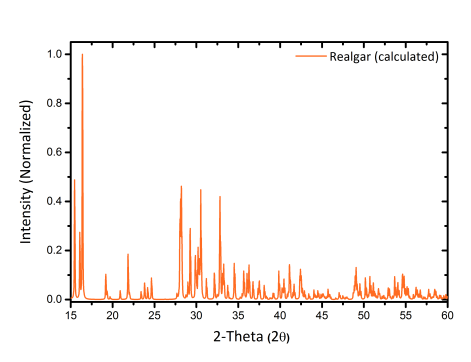 Theoretical XRD spectrum for realgar. Note how the plot has many narrow peaks but otherwise remains flat along the 2-Theta axis.

All those peaks correspond to different planes of atoms within the sample, whether it be a horizontal plane, a vertical one, or somewhere in between.

What does this tell us? Well, because each crystal has its own particular structure, each crystal has a signature pattern of peaks. If we analyze, say, an aged sample of realgar, we can search the plot for known peaks of realgar and pararealgar (and maybe even other things) to see how much of each is present. Neat!

Science is over, donuts are (every Monday at 4 pm) forever. (I grabbed that last maple-iced one towards the bottom.)

When it comes to actually doing x-ray diffraction, I’ve been using an x-ray diffractometer (PANalytical X’Pert PRO. Such a punny name, I know) in the X-Ray Diffraction Lab, which is more or less just downstairs from my desk.

First, I had to get trained. After reading a safety manual from 1992, taking a fifty-question quiz based on said manual, watching a super outdated safety video from the 80’s on a 12” TV, and (not quite) understanding a bewildering run-through of how to use the diffractometer, I (along with my mentor, two other PhD students, AND Alberto [I mean Professor Salleo] himself) became university-sanctioned to perform x-ray diffraction.

I’m an expert at the X’Pert (not really, but I’m trying!)

The easiest way to prepare a powder sample for XRD is by packing the powder into a slide with a well in it. Problem: With the X’Pert, samples are mounted vertically, so powder would definitely fall out of the slide.

Mega problem: We do not want arsenic falling out of the slide and onto lots of other things.

So here’s the question: what’s the best way to adhere my realgar powder to my slides?

The answer isn’t a fancy epoxy distributed by a chemical supplies company. It’s not a special binding agent used in restoring paintings. (Trust me, I tried both of those things out.)

It is, as you may have guessed from the title, top coat. Specifically, Essie gel-setter top coat.

It’s relatively cheap, easy to obtain, and almost as easy to apply (I can even do it in the glove box with all four pairs of gloves on!) After I brush on a bit onto my silicon slides,  I can go ahead and sprinkle some realgar on top with my automatic pepper grinder and wait for the whole thing to dry.

Most importantly, it produced the best XRD plot out of all the things I tried.

Look at how nice and flat the Essie plot  is!

But now I have all these other top coats hanging out above my desk that I won’t be using to prepare samples. Maybe I should start doing my nails at the office.

I could really use a manicure…but which one do I try first?