It may not surprise you that artists and craftsmen have known this for millennia. They might have mixed paint made from red lead or vermilion with Indian yellow or ochre to achieve an orange color.

But sometimes, mixing paints is just too much work. Enter realgar. 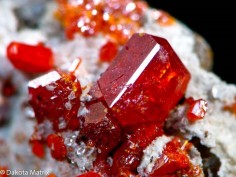 Realgar, an arsenic sulfide mineral, was used as a vivid orange pigment centuries ago. Some pockets of realgar use were early China (where it was also believed to have medicinal properties), early Egypt, 17th century Dutch still life, and 16th century Venetian oil paintings. 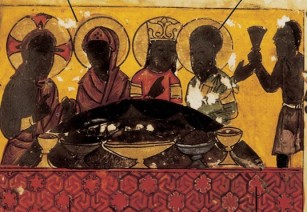 13th century Byzantine Gospel lectionary. The background is composed of a mixture of realgar and pararealgar (read on to find our more about pararealgar!)

Titian’s Bacchus and Ariadne, 1520-23. Realgar was used to paint the orange robe of the woman right of center.

Rachel Ruysch’s Flowers in a Vase, c. 1685. The orange lilies were painted with realgar.

There are two major problems with realgar that explain its generally limited use throughout history.

First of all, as an arsenic-containing compound, realgar is quite toxic, and people have known that since ancient times. (Why they would use it in ancient Chinese medicine is beyond me.)

Both compounds have the formula As4S4, just with different arrangements of atoms.

Realgar molecule. The purple atoms are arsenic and the yellow atoms are sulfur.

The mechanism for realgar (orange) degrading into pararealgar (yellow)

The question is, how does this cycle kick off in the first place? Where does the initial As4S5 come from? For a while, it was believed to come from the reaction of realgar with oxygen.

The combustion of realgar to form As4S5 and arsenic trioxide. This model was initially proposed in a 2003 paper.

The only evidence for this reaction taking place was the presence of arsenic oxide, As2O3 as a byproduct of the degradation.

What Shawn Lee found by the end of his REU project last summer (you can read a little about it here) was that realgar still degraded into pararealgar, even in a purely nitrogen environment (in other words, without oxygen). However, this finding doesn’t completely rule out the model outlined above—it might just not be the only way for As4S5 to form.

What I’m exploring is the effect of oxygen on the degradation of realgar. While oxygen might not be a requisite for the process to occur, it could still be a contributing factor. I will be varying the level of oxygen around my realgar samples and seeing how that affects the rate and extent of their bleaching.

At the end of the day, all of my beautiful orange will become yellow. Maybe I could take that, mix it with red, and produce orange again. But that’s just too much work.

2 responses to “Yellow is the new Orange”