This summer I got to try out a technique that was totally new to me – Reflectance Transformation Imaging (RTI). RTI is a photographic imaging method that allows the viewer to see small features on the surface of an object. By combining pictures of the object taken with different lighting angles, the RTI software creates a single image that shows raised surfaces and small dents with much better contrast than an individual photo.  We used this technique to image the front surface of the white-ground lekythos.

Setting up the tripod for our first attempt at RTI. Fortunately, this part can be done with the lights on.

To capture the RTI images, we mounted a camera on a tripod and focused on the top surface of the lekythos. We placed two reflective black spheres in the field of view to allow the software to determine the position of the light source during post-processing. We then turned out the lights and moved a single light source in a hemisphere around the lekythos, capturing images at about 50 different angles. We used the RTI software from Cultural Heritage Imaging to compile all of these images into a single RTI file. Instead of just displaying RGB values for each pixel, the RTI software also records the surface normal vector at each point, allowing it to calculate how light would reflect off the object from any arbitrary angle. The software also has other image processing algorithms that allow you to see the object with specular enhancement, a variety of edge sharpening effects, and multiple light sources.

A screenshot of the RTI compilation process, showing thumbnails of all the individual pictures of the lekythos. The sphere on the left is a compound image of one of the reflective black spheres placed near the object; each bright reflection in the sphere corresponds to one of the 50 images and indicates the location of the light source in that image.

Our first attempt at RTI was not completely successful. As we moved around the lekythos taking picture after picture in the dark, the setup moved ever so slightly, making the compiled image blurry. However, I was still able to distinguish features on the RTI image that I hadn’t noticed on the lekythos itself – the slight ridges indicating painted lines in the female figure’s face, hair, and clothing; the tiny scratches and pits in the white ground between the figures; and some small bumps in the black gloss at the base. 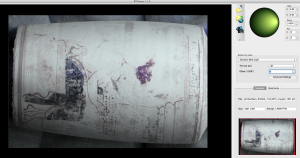 Image of seated female figure from our first RTI attempt, with some surface detail visible. The green circle to the right allows the user to control the position of the virtual light source.

Our second attempt was much more successful! We used a smaller platform for the lekythos, secured it to the floor with a lot more masking tape, and were even more careful not to touch any part of the setup. We got several clear images of both of the figures on the lekythos.

The standing figure on the lekythos, in an image from the second RTI attempt.

RTI allowed me to see details on the lekythos figures that I had missed before. Being able to see raised and dented areas with higher contrast was especially helpful in places where the outlines, pigments, and efflorescence on the surface are not easily distinguishable. The process of adjusting the camera, object, and light sources also taught me a lot about basic photography concepts and camera settings. Now that we’ve tried RTI a few times, it will be a useful tool for future conservation projects in the Art+Science lab!