On August 5 and 6, two representatives from Bruker Corporation visited the Cantor Conservation Lab for a hands-on workshop on the fundamentals of X-ray fluorescence spectroscopy (XRF), an elemental analysis technique. The workshop was open to researchers from Stanford, as well as from local museums. Although our group was small, it represented a diverse selection of interests and backgrounds, including archaeology, geology, chemical engineering, materials science, and art conservation, indicating the wealth of applications for XRF.

The workshop was divided into two sessions. The first day explored the theory and technology behind XRF, while the second day focused on the analysis software and calibration process. The specific model we used was a brand-new Tracer III-SD, lent to us by Bruker. After being reassured that the levels of radiation emitted are minimal, we tested the Tracer on a few objects we had brought to the Conservation Lab, including an ancient Chinese bronze dagger and Flowers in a Glass Vase by Ambrosius Bosschaert the Elder. 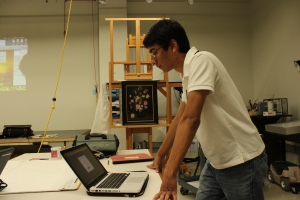 Because the museum is closed to visitors on Tuesdays, we also had the privilege of using the Tracer up in the gallery. Of special interest to me was a brief investigation that we conducted on a bronze statue of a Daoist deity. To the naked eye, it appears as though the surface of the statue might contain some traces of gold, particularly on the robes of the deity. The Tracer was able to not only confirm this, but also identify mercury, which is expected because these two elements easily amalgamate. 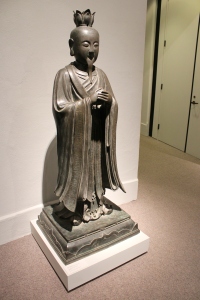 Like any analysis technique, XRF has certain limitations. For example, it cannot detect elements lighter than neon, and the results can be difficult to quantify. Nevertheless, the fact that the instrument is both portable and nondestructive makes it highly valuable to the art community. I look forward to gaining more experience with the Tracer for my own project on a Shang dynasty bronze vessel, and I believe the Conservation Lab will find many uses for it.