Henry Moore’s “Large Torso: Arch” is one of the many bronze sculptures we have in the collection here at Stanford.  Like most bronzes, it has a chemical patina that was applied by the foundry that cast it: in this case, Noack Foundry in Berlin.  Moore chose to have his bronzes fabricated by Noack at least partly because of their patination abilities; indeed they are one of two foundries that cast the vast majority of his work.  For whatever reason, Moore judged Noack’s finishing techniques and their results to be appropriate for his sculpture.

One of the main obstacles conservators face is the mystery behind these techniques.  For the foundry, such secrets keep them in business; for the conservator, the fact that these details are kept a secret makes work difficult.  Even though you might be able to guess what was used to create a certain patina – Ferric Nitrate, Cupric Nitrate and Sulfurated Potash are all commonly used – the variables that contribute to the final appearance are endless.  For instance, the concentration of the solutions, the duration of application and the surface temperature of the bronze can all change the end result.  Conservators often solicit artists directly about their patination process so as to to anticipate potential future conservation needs.  While this has its advantages and has proven invaluable here at Stanford, its drawbacks are that opinions on patina often change and that people sometimes forget how a certain effect was produced or what the original parameters of production were. 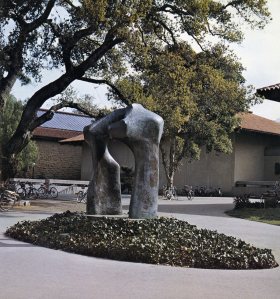 The lack of definite information about the exact chemicals used and the details of the patination process leaves conservators without a direct path to follow.  If they want to maintain the artist’s original intention throughout the years, they have to protect the mystery patina that is already there.  If it’s not protected the bronze will quickly corrode and the surface will begin to look more like it’s been covered in teal spray-paint than layer upon layer of subtle, chemically patinated color.  A common misunderstanding about bronzes is that the bright green corrosion that can develop over time is the patina.  In fact, the secret patinas of most foundries are almost always composed of layers of translucent color on top of each other: brown, green, black, and sometimes even blue, red and orange.  The combination of layers of colors like these builds up a surface that reacts to changing light conditions and highlights different areas of the surface.

Of course, the artist could express that they want the patina to corrode.  In fact, Henry Moore is known to have expressed this exact sentiment for certain sculptures.  However, it’s also known that he sometimes insisted on complete repatination because of a corrosion.  Moore’s fascination with and insistence upon the relationship between his sculptures and their environment supports this modifiable aesthetic.  He didn’t have a monolithic approach to maintaining his sculptures because he didn’t see them as isolated entities that could stand on their own, but rather as object that were deeply enmeshed in their environment.  In other words, the record seems to indicate that Moore’s opinion on patina depended upon the sculpture’s context.

"Large Torso: Arch" in 1998 before conservation

So the million dollar question is: what did Moore think of this particular cast in this particular location?  Unfortunately we do not have a definite answer.  However we do know that he liked the site and that he liked the appearance of the patina when it was originally installed.  So all we can do is try to preserve that appearance as best as we can.  This is why we apply a wax coating to the surface.  Otherwise, the patina would corrode entirely away.  This is also why we don’t apply a thicker, more protective and more opaque coating.  Because we know he like the sculpture as it looked when it was first installed.

"Large Torso: Arch" in 2003 after conservation